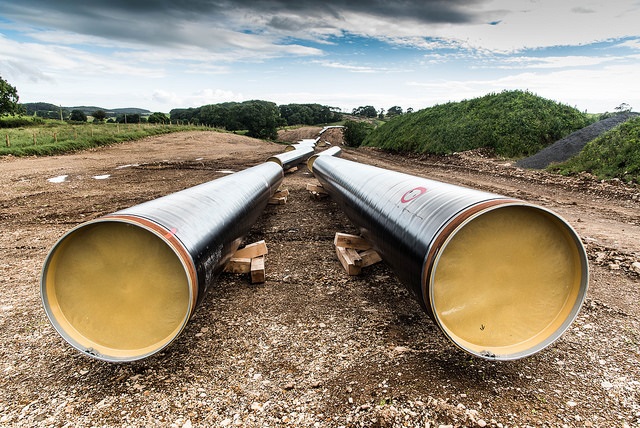 Joint Press Release by 350.org, Corporate Europe Observatory, Counter Balance, PowerShift, Gastivists, Justice and Environment and Food & Water Europe. Brussels, 24 November – Today, the European Commission presented its third “Projects of Common Interest” (PCI) list composed of energy infrastructure projects. It contains around 90 gas infrastructure projects. This is even more than in the list of 2015 and directly contradicts Climate and Energy Commissioner Miguel Arias Cañete’s claim that the new PCI list was moving away from gas.[*] “Supporting more climate-killing gas infrastructure is definitely not in the common interest of Europeans, and even less in the interest of communities worldwide that are already heavily impacted by climate change. Providing EU tax-payer money for many of these “priority” projects is a step into the past and a big step away from the Paris Agreement. It also further closes the short gap of time we still have to combat climate change” says Frida Kieninger from Food & Water Europe. Projects on the PCI list are given the highest national priority and benefit from accelerated permits and streamlined environmental impact assessments. Many of them receive grants from the Connecting Europe Facility (CEF) – EU tax payer’s money. “We can clearly see the gas industry’s fingerprints on the design of this years’ PCI list. Unfortunately, in EU institutions as well as in Member States departments, the gas industry lobby is still setting the agenda. The PCI process itself has been led by the gas industry through the central role of industry lobby group ENTSO-G [the European Transmission System Operators for Gas] in deciding which projects are eligible or needed”, says Pascoe Sabido from Corporate Europe Observatory. “It is obvious that ENTSO-G will never work towards its own abolishment, so involving it so closely in the PCI process undermines much needed climate action.” The European Parliament now has two months to object to the list, otherwise it will be automatically approved. The Parliament has no ability to vote on single projects or on gas PCIs alone, and must decide on the PCI list as a whole. Besides a number of electricity and some oil and smart grid projects, the 90 gas projects mean that for the third time in a row, the Commission has not managed to reduce the amount of fossil fuel projects to even close to 50, as stipulated by the TEN-E regulation.[*] However, the European Commission claims it is supporting fewer gas projects through the PCI list, because it has clustered many together to count them as single projects. “Clustering projects to artificially lower their number is nothing but a cheap accounting trick and changes nothing about the fact that the PCI list still supports far too much gas infrastructure”, says J&E Board Member Birgit Schmidhuber. The current list contains a host of mega-pipelines such as the $45bn Southern Gas Corridor pipeline, the Baltic Pipe and the “Eastring”. Meanwhile, demand has been declining for over a decade. Also on the list is a number of new LNG terminals to import costly, climate damaging liquefied gas from all over the globe. Terminals in Sweden, Ireland, Croatia and Poland get EU support while the EU-wide use of such terminals was at less than one fifth of their capacities in the past. So far, gas PCIs eligible for funding received twice as much money – over €1bn – as electricity projects, despite the CEF regulation stipulates that electricity PCIs should receive the majority of CEF funding. Over €3bn of the €4.7bn foreseen for gas and electricity PCIs from 2014-2020 still remains unspent. It is still unclear whether the trend of favouring gas project funding will be turned for the benefit of electricity projects in the next three years.   End notes [*] Cañete told Ends Europe in November 2017 “In the [PCI] list we will publish at the end of November, you will see there is a big shift from gas to electricity,” See https://www.endseurope.com/article/50896/eu-priority-project-list-to-favour-electricity-over-gas [behind a paywall] [*] TEN-E regulation: http://eur-lex.europa.eu/LexUriServ/LexUriServ.do?uri=OJ:L:2013:115:0039:0075:en:PDF   Contact: Frida Kieninger, Food & Water Europe, Campaign Officer, Rue d’Edimbourg 26, Brussels 1050, Belgium, +32 487 24 99 05, fkieninger(at)fweurope.org  ]]>